The Serious Mistake that Nigeria cannot afford to make NOW! 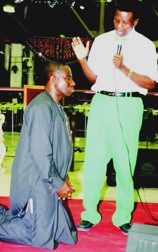 The last time that a flurry of diplomatic activities was unleashed on Nigeria by the international community was sometime in 2009/2010. The Yar’Adua mafia had held Nigeria hostage and was doing everything within its reach to stop the ascension of Mr. Goodluck Jonathan to the Presidency. Then the American Secretary of State Hillary Clinton paid unscheduled visits. The Quartet’s envoy on the Middle East and former British Prime Minister Tony Blair did as well. Their mission was to rescue Nigeria from itself. Today, the Secretary of State of the United States John Kerry is making an unscheduled visit. It remains to be seen if this will mark the start of another flurry of actions to once again help Nigeria pull its own chestnut out of the blazing conflagration.

After all, Nigeria is consistently showing a spate of immaturity whenever the question of transitioning of power arises. A typical Black African malaise, one may be tempted to say. Yet, the present situation bears all the hallmark of a distinctive deviation that will underscore the failure of the project of self-perpetuation even at birth. This is a case of an incumbent seeking another term in office against the very powerful force of dismal performance in the first term and catastrophic prosecution of simple electioneering campaign.

There is indeed, nothing to be said about the disastrous performance of President Goodluck Jonathan as leader of Nigeria that has not already been exhaustively presented in previous articles and third-party analyses. It will suffice to mention however that recent reports from Northern Nigeria have revealed the capture of yet another strategically important military base in Borno State by the dissident Islamic rebel group Boko Haram. Reports also uncover the grim situation of an assault on the capital city of the same state Maiduguri leaving the aides of the President trapped, who had arrived in advance to prepare for a presidential campaign visit.

In the midst of this deadly and annihilating security risk that threatens to envelope the entire country on the long run, is the unprecedented rift between Nigeria and the United States that has clearly come to a head in recent times. While the Americans refuse to supply Nigeria with attack helicopters on the official pretext that Nigeria lacks the capacity to maintain military hardware of that category, they have also terminated all forms of training program to create elite battalions out of Nigerian troops. They have refused to share sensitive intelligence materials with the Nigerian authorities for fear of compromising their sources in the belief that the Nigerian army has been deeply infiltrated by Boko Haram operatives.

For the most part, Nigeria has been complaining in recent weeks and months that the inability of the Nigerian forces to rein in Boko Haram is predicated on the refusal of the Americans to arm the Nigerian army satisfactorily. Never mind though that the smaller army of Cameroon without the compromise of Boko Haram infiltration has been successfully dishing out serial defeats on Boko Haram. Never mind too that the Americans will ask themselves if indeed it is the Nigerian army that is to be armed with assault helicopters or Jonathan’s private army that is being built in preparation for a post-election assault on the unity of Nigeria.

Now the Americans are reportedly sidelining the Nigerian authorities and seeking a solution to the Boko Haram question through consultations and cooperation with smaller neighbors of Nigeria in a matter that is centrally Nigerian.

Have we ever stopped to ask ourselves the reason behind this humiliation that is happening for the first time ever in the history of Nigeria as a regional power in Africa? It should be noted that it is the first time that Nigeria is being ruled by a person from a minority region in terms of the distribution of population.

Having seen the performance of President Jonathan recently in campaign outings committing one blunder after the other, do we ask ourselves how he is likely to come across in any one-on-one meeting with a very smart and alert Barrack Obama or John Kerry or the renegade Tony Blair? Do we ask ourselves what bunch of laughable nonsense our President is likely to utter before mentally sophisticated leaders in private meetings? A President, who declares publicly before a huge crowd that imprisonment is not an option in fighting corruption? Never mind the disgraceful quality of English a President is likely to speak before world leaders in private meetings, who says publicly before a large crowd “How much money did Nwobodo stole?” or promises Nigerians “We will create unemployment” (Slip of tongue or not).

Given this impeccable combination of intellectual inferiority and inordinate handicap in verbal articulation, does it come as a surprise that President Goodluck Jonathan is hardly seen as a favorite partner for private meetings and serious diplomatic business by any known world leader? And to imagine that this is the man representing Africa’s most populous and arguably “most powerful” country? For comparison, former President Olusegun Obasanjo was and is still not an eloquent speaker or orator. Yet he had a level of intelligence that makes his sometime clumsy and boring sentences worth listening to that you’d sometimes miss out on what he says at your own peril.

Yet neither President Jonathan nor his aides and strategists will show any readiness to acknowledge the disaster represented by the President himself that is threatening to cripple the existence of the entire country.

Today, the alternative that we have is Muhammadu Buhari to seize Nigeria again and roll it right back to the days of moderate sanity.

I do agree wholeheartedly that General Muhammadu Buhari in the history of his recent past did not quite cover himself with outstanding glory. There were times when General Buhari described attacks on Boko Haram as an attack on the whole of the North and by implication, on Islam. There are times when General Buhari was reported to have advocated Sharia in the whole of secular Nigeria without coming out in explicit denial of any of the two allegations. There were actions attributed to General Buhari in his days as military head of state that signaled sectionalism and tribal favoritism such that people now fear that General Buhari has now edged closer to his ambition of Islamizing secular Nigeria. There are cases of intransigence in his days as military head of state such as the anti-jurisprudent killing of cocaine smugglers with a retroactive law in such a way that even Olusegun Obasanjo also fears that the main problem with Buhari’s may be over-intransigence.

Yet the Buhari of today is no longer the Buhari of 2003, 2007 and 2011. The difference, you may want to ask? He is no longer running his own party on his own terms. While he was begged outright, to be the presidential candidate of parties in the past and was often left with the leverage of defining and ascertaining his own agenda and political program on his whims and caprices, today General Buhari even had to contest in his party primaries to be made a presidential candidate in the very first place. His party, which is a merger of several equal and unequal parties, is now run by a conglomerate of political interest groups – the Good, the Bad and the Ugly. The Ugly may be good and may be bad but is not a poster piece for the display cabinet.

In short, even though General Muhammadu Buhari is the poster boy of the All Progressive Congress today, the party is not run by him alone and he is just first among equals in a congregation of political sojourners seeking the greener pasture for differing subjective motives. In other words, chances are far slimmer than they were in past years that Buhari today, will be able to wield the powers of the Presidency to his heart’s delight and simply declare Sharia on Nigeria or Islamize the country while working with a team of decision-makers that will not hold such views. He did not do it while he was a military dictator and was surrounded by a majority of Muslim devotees and will not do it today.

His obstinacy that was a cause for concern in past actions is indeed, his virtue of today that we hopefully wish to see channeled towards the criminals of the oil sector, who President Jonathan has so far, willfully pampered and facilitated for selfish reasons.

On the other hand, the focus on these dark sides of General Muhammadu Buhari cannot and will simply not wash away the other side of his character that makes him stand out as the strong and iron-willed man that Nigeria needs here and now to salvage Nigeria from the destructive and clueless grips of President Jonathan and his uncultured, war-mongering cabal. Buhari is the only former military President of Nigeria who is ostentatiously exempted from accusations of corrupt enrichment. Even critics who finger him in one irregularity or the other in the PTF cannot point out a single material or immaterial edifice to the credit of the General that may be attributed to corruption. Yet, I heard Dino Melaye saying the other day that General Buhari voluntarily declined receiving Naira 23 million as his due monthly wage that is set aside for former Nigerian Heads of State and asked to be paid only N2.3 million monthly, which he has been receiving ever since. If this is no virtue, I honestly, do not know what is.

Knowing the fear of the underground powers of the electricity and oil sectors in President Jonathan that he could not confront the decadent ills of our society, common sense tells everyone that a strongman and fearless operative is what Nigeria needs now to start the battle of cleansing the sectors and the military. Very many will agree quietly that Olusegun Obasanjo is one candidate that would have had the ability to perform this feat today with the desired radicality. Since the man is not marketable to a majority on Nigerians with the wrong impression of him, General Muhammadu Buhari is another equally strong-willed and determined character that can face up to these challenges in these critical times.

While the fear dominates the air that we have run out of time to fix the military and reclaim territories seized by Boko Haram, President Jonathan is obviously planning on dividing Nigeria along ethnic lines by allowing his cronies pile up arms including war ships on pretexts that are unheard of anywhere in the world. When former President Obasanjo cried out in his open letter, he was abused and even his foolish daughter who rose to fame on the back of her father joined the bandwagon and abused her dad publicly. Now we know President Jonathan’s strategy behind his pretense today: “The North should kill themselves and share their territory with Boko Haram. We will take our south with us and protect our oil.”

The short-sightedness and dumbness in this reasoning have been the characteristic hallmark of Goodluck Jonathan’s Presidency. They have also been the hallmark of his campaign for re-election, where several attempts at sticking scandals on Muhammadu Buhari have simply backfired on his desperate ambition and are throwing his team in disarray.

Re-electing Mr. Goodluck Jonathan (with his questionable doctorate qualification) to foster the continuation of his third-rate intellectual disposition on the hallowed seat of presidential sagacity will be a very costly mistake that will trail Nigeria through several stages of political evolution. A word is enough for the wise!

3 comments on “The Serious Mistake that Nigeria cannot afford to make NOW!”