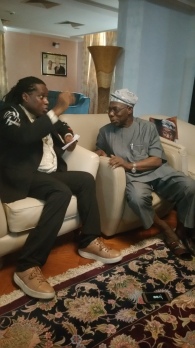 Amongst all past political leaders of Nigeria, former President Olusegun Obasanjo stands out for one major feature. He is a President that is most outspoken on the political direction the country is being steered. He is the most abused former President and he is the most passionately hated by a vocal section of the citizenry. In his active days as President, Olusegun Obasanjo shared a mutual sense of unsavory repugnance with the news media. This was largely facilitated by the fact that he had no special assistants on new media or social media. He had no foot-soldiers roaming the Internet to defend his cause. He did not see the need to maintain an army of brown-envelope-journalists to safeguard his image. He was fair game to critical pundits and wannabes of all colors. Unlike some of his successors, who, obviously, seem to have taken safeguards in this regards, Olusegun Obasanjo is today, by all accounts, the most passionately hated ex-President.

Volunteers like myself, who sympathize with him and detest the unfair journalistic treatment being meted out to him by many disgruntled and amateurish pundits – some deliberately for maximum damage and some for lack of complete information and knowledge – often have a hard time moving against the tide.

That was the case in the days of his Presidency, in which we were carelessly, and conveniently branded paid propagandists and it is the case today. All through the years, Olusegun Obasanjo has remained true to himself keeping no media team to fight against the waves. Obasanjo will pay no one for propaganda purposes.

The anger and hatred that many have cultivated against him, through the years, partly, for lack of objective information, were brought to bear once again in the wake of his critical open letter to the current incumbent President Muhammadu Buhari. With deep conviction and without a care about the absolute veracity and authenticity of the facts that they think they have known about Olusegun Obasanjo all along, young people, some barely the age of his grandchildren, freely and happily rain abuses on him, on the social and mainstream media, sometimes in unprintable terms and in very un-African manner. Challenging voices like mine urging caution are the least worries that the predators have. We are dismissed with conveniently conjured characterizations drowning whatever words of reason we may have. Some of such individuals suffered one misfortune or the other under the Presidency of this rugged leader, who has never feared to step on toes. Some are loyalists of his political opponents, sponsored or passionately convinced of their cause and some are simply consumers of skewed media products that were designed to suit specific political narratives.

Be that as it may, I have, also, personally, had cause to not agree with the former President completely in all of his pronouncements. Since the writing of my first book “Nigeria’s Journalistic Militantism” in which I strongly objected to the extreme partisanship of journalism in Nigeria using Olusegun Obasanjo’s presidency as a case study, I have had the rare privilege of winning the trust of the former President.

When, in the wake of his open criticism of the incumbent President Muhammadu Buhari, I could not agree with his criticism of the economic policies of the latter, I told myself, I’d rather wait to visit him whenever I am in Nigeria and debate this issue with him one-on-one in all calmness. Events, however, occurred in quick succession and spiraled out of control. He has not only reconciled with his former political party, which he publicly denigrated by having someone help him tear his membership card before running cameras, he took the shocking step of reconciling with his former estranged Vice President and endorsing him for the Presidency challenging the incumbent President in the upcoming election.

That was the last straw. I had to meet him and meet him quick to hear his own side of the story. It took a few contacts with his aides and on hearing my name, he was ready to meet me immediately. I had to travel to Nigeria at short notice to do a one-on-one interview captured in a highly amateur recording for lack of professionals in human and material resources and without sponsorship and patronage.

I humbly apologize for the poor technical quality of the footage, in which I had to complement a part of the recordings with an extract from a mobile phone recording that was used as a back-up due to technical inadequacies.

After my conversation with President Obasanjo, I came off more convinced than ever that President Muhammadu Buhari had partly willfully and partly, unknowingly derailed in his leadership. His willful derailment lies in his extreme reluctance to start the fight against corruption from his doorstep and take on his kinsmen decisively, also in times of murder and massacre. His unknowing derailment lies in his obvious professional inadequacies in managing the economy in spite of the presence of competent advisers and technocrats around him.

To sincere lovers of the country Nigeria, Olusegun Obasanjo is a man, who seeks to give the nation the best it deserves. President Buhari’s sudden sense of majestic conceitedness and stoically arrogant disposition would certainly make anyone seek to find a more competent replacement before he does more damages in his world of resistance to counseling. After all, age, health and professionalism are not on his side. Yet, he has scored some notable achievements that need to be conserved on many fronts.

While the urgency to replace President Buhari in the way that he has currently metamorphosed into a static leader in the shell of a family cabal is compelling, former President Obasanjo also admits that he has no guarantees that Abubakar Atiku, if he becomes President, will truly keep the standard of best practices. He is, however, prepared to give Atiku the benefit of the doubt in the face of strong assurances.

I hope you enjoy viewing the video through the following link and start a constructive debate.