Ngozi Okonjo-Iweala and the Erosion of Good Governance! 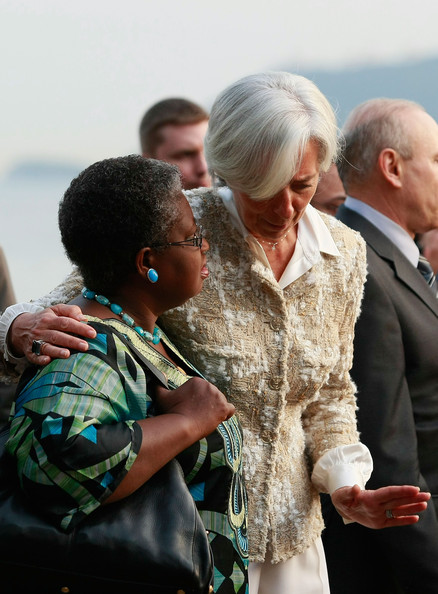 Midway through the tenure of Goodluck Jonathan’s Presidency, I wrote in an article that Dr. Ngozi Okonjo-Iweala, the Minister of Finance and Coordinating Minister of the Economy, was the biggest loser in the government of the colorless and uninspiring President. Hardly anyone took note of this serious observation. After all, it was a no-name writer and an unimportant Internet-based analyst making the statement. Those who took note dismissed the claim with a wave of the hand alluding to the height of respectability enjoyed by the Minister in international circles

The same respectability it was that she enjoyed with Nigerians across-the-board after her impressive first appearance in the government of President Olusegun Obasanjo. Her role in negotiating away Nigeria’s foreign debt with the Paris Club earned her a huge reputation even though there were also dissenting voices, who claimed she did not strike the best deal that Nigeria could have taken home and alluded to a possible connivance with foreign interests. Yet, Ngozi Okonjo-Iweala was highly respected by Nigerians, not the least, because of her commitment to fiscal discipline and a strict spirit of functional bureaucracy. Government functionaries around her found it difficult (even though not impossible) to divert funds for personal enrichment.

As I wrote in my book “Nigeria’s Journalistic Militantism”, Dr. Okonjo-Iweala was nicknamed, for this reason, by fellow government functionaries, as Ngozi Okonjo-Wahala. Like many other observers, I personally saw in her, the first female President of Nigeria in the making. Many like me were convinced that Nigeria needed more of her type to reinstate operational and routine sanity in the body of society even though there were voices, which expressed serious reservations at the oversized canonization.

Until she was brought to the limelight by President Olusegun Obasanjo, however, not much was known about her in the domestic scene. There were no hints of negatives to juxtapose with positives and build up expectations for the future. She came in. She saw and by the standards of the days, she conquered.

Following the battle that wrested Nigeria from the grips of the Yar’Adua mafia and installed Goodluck Jonathan as President, hopes were high that justice will henceforth, be brought to bear on the distribution of political power in Nigeria with the requisite geographical equilibrium. Having for the first time, had a President from a minority tribe of the South-South namely Ijaw, it was a matter-of-course to expect the next major ethnic group of the Eastern region to produce the next President. There was a general but unspoken consensus that Northern Nigeria will have to wait a while before the Presidency gets back there again having had more than a fair share of contribution at this level. For this purpose, all eyes were set on Mrs. Ngozi Okonjo-Iweala. Her recruitment by President Goodluck Jonathan for a second shot at practical experience in political leadership was, therefore, a highly welcome maneuver. She was not only appointed a Minister, she was also granted wide-ranging powers that made her a virtual Prime Minister in a Presidential system of democracy.

Things however began to fall apart when the President stuck his neck out so recklessly in a bid to remove fuel subsidy in January 2012 claiming he was ready for a revolution without truly knowing the implications of a violent revolution. At the time, however, people widely suspected international financial institutions as the forces oiling the machine of the clueless President’s design. Quite coincidentally, the newly appointed boss of the International Monetary Fund, former French Minister of Finance Christine Lagarde, discovered a newfound love for Nigeria, which she visited repeatedly within a short period. She engaged in public functions and made pronouncements encouraging the removal of subsidy on consumer products stressing the economic wisdom in leaving consumer products to the forces of the free market.

This further strengthened the suspicion that foreign forces were remote-controlling the President of Nigeria, who had then worked hard enough to earn himself the reputation of ‘clueless’ due to repeated gaffes.

Coming from the World Bank herself, Ngozi Okonjo-Iweala was naturally predestined for suspicion of acting out the script of international monetary institutions, which are widely suspected of ever acting contrary to the interest of Black Africa. Yet, she had a bonus with Nigerians because she was the celebrated technocrat of the Obasanjo years. She joined town hall meetings, symposia and discussion forums to campaign on behalf of the President, to appeal for public understanding that fuel subsidy needed to be removed. Even though suspected, to be the brain behind the plot, she came out in fierce defense of her role claiming not to be the architect of fuel subsidy removal.

The matter was finally resolved. Solutions were sought. To stop marketers and profiteers from ripping-off consumers in the regime of fuel importation, there was a general consensus that the local production of refined products had to be boosted. That ultimately defined the need for the Subsidy Reinvestment Program (SURE-P).

Now, as the ultimate power overseeing the flow of cash in and out of the public treasury, the Minister of Finance and Coordinating Minister of the Economy had absolute access to and knowledge of all activities impacting the economy of the country. She was aware of the vested interests that sabotaged the creation of self-sufficiency in fuel refinement. She was aware of bogus bills and ghost ships and shipments that she had to pay for with the budgetary allocation for fuel subsidy. What happened to SURE-P is anybody’s guess. The special Ministry that was created for the Niger Delta simply ended up becoming one of the several nipples for milking the sacred cow dry.

The question then arises as to what advice the respected technocrat Minister was giving the President at this crucial time. Having campaigned relentlessly to aid the President’s bid to remove fuel subsidy (a project that she claims she did not recommend but also did not discourage), the question also arises if her hands were so tied that she could not fight hard enough for the building of refineries or refurbishment of existing ones? Those things for which Nigerians held her in high esteem and her colleagues called her “Wahala” simply disappeared overnight?

Rumors of widespread corruption in the administration came to a head latest during the presidential campaign in 2015, precisely after the postponement of polls for six weeks. Money was squandered on bribery for votes and many interest groups received gratifications in dollars. Where were these monies taken from? Who authorized their disbursement and from what allocation were they taken? What role did the Minister of Finance play in this respect? Did she cry out?

Even though a lot happened within the government that called for concern, Ngozi Okonjo-Iweala did not for once, complain about anything wrong in the system. On the contrary, she joined the bandwagon of soiled hands in attacking whistleblowers. Her voice could not be overheard in her implicit and explicit condemnation of Sanusi Lamido Sanusi for blowing the whistle on $20 billion unremitted fund from the NNPC. She countered the former Central Bank Governor and came up with the figure of $12 billion. Yet her general reaction to the whistleblower as perceived in the public was not one of support but one of disgust and resentment. She was far from being the one that would have blown the whistle on this evil machine of entrenched corruption. On the contrary, she joined or at least felt comfortable in the company of crude politicians who sought the head of anyone that dared to spit on the stolen porridge on which they were feeding fat.

She floated the idea of a forensic audit of the NNPC accounts citing her international reputation that was at stake. She implemented it and saw key figures refusing to cooperate with the PriceWater auditors. Ngozi Okonjo-Iweala did not speak up. The Pricewater House’s haphazard investigation concluded in a report that was submitted and promptly kept under seal. A select section was released for public consumption. Ngozi Okonjo-Iweala knew too well that this was a perversion of truth. She did not speak up.

Non-payment of salaries became a routine habit at state and federal levels. Ngozi Okonjo-Iweala knew too well, what was responsible for the shortage of funds. She knew too well who had been withholding funds from the NNPC. She knew very well, who had been dipping his hands in foreign reserves and the Excess Crude Account. She did not speak up. What fun was she having being a Finance Minister that could be said to have mainly been coordinating corruption all over?

There is no evidence in public domain to prove that she amassed wealth within this four-year tenure and thus joined the bandwagon of looters. Yet her general attitude of “not seeing, not hearing and not saying” speaks volumes. Murmurs can now be heard loudly that it is probably a question of time till tales of corruption involving her directly are unveiled.

Former President Obasanjo counted her among the five Presidents that ruled Nigeria under Goodluck Jonathan. Latest upon the confirmation of her authorship of the infamous idea of fighting corruption with high-tech, the extent of her involvement in governance became clearer. It slowly became obvious that the death of the anti-corruption battle, the dearth of good governance and the complete collapse of systemic sanity all happened with the overt or covert collaboration of a material that many celebrated as a future female President. Thank goodness, it did not come to it.

The lesson to be learnt: Under President Obasanjo, Ngozi Okonjo-Iweala served under a hands-on President. A President who left her in no doubt, what he expected from her and she ended up with a brilliant public perception rating. Under Mr. Jonathan, Dr. Okonjo-Iweala served as a Co-President and messed it all up beyond redemption. She seems to have simply joined the bandwagon and catered for her own welfare and secured her future. Funnily, she didn’t seem to have given a damn that the whole world was watching. Precisely the world, whose regard for her capabilities formed the basis of any credibility that made her a force to be reckoned with.

So much was expected of her and so much she despised and so many she spat upon through omissions and (at best) indirect collaboration. Coming out in the wake of her principal’s demise, to tell the world that she is a cancer survivor simply smacks of attempts to garner sympathy amid fear of prosecution for wrongdoings.

In spite of these though, Dr. Ngozi Okonjo-Iweala is to me like an errant Nuhu Ribadu, whose capabilities and potentials can and will benefit any society at any time under the proper conditions. With a hands-on leader, who cages Ngozi Okonjo-Iweala and defines the scope of her operations without such limitless laissez-faire powers of “live and let live”, Ngozi Okonjo-Iweala can still be a very useful technocrat to any society if she drops the politician in her that she has wantonly fathomed under Goodluck Jonathan. We should only not throw away the baby with the bathwater out of fury and sentimental commitments.